The National Land Agency (NLA) through its annual staff charity drive, contributed well-needed assistance to the Walker’s Place of Safety on March 26, 2018 at the head office of the Child Protection and Family Services Agency (CPFSA). The contribution which included toiletries, food, personal care items and articles of clothing, were donated by NLA staff over the course of six (6) weeks. 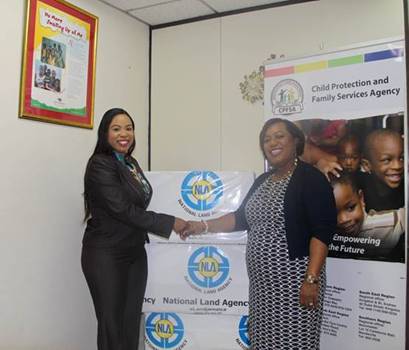 Manager, Marketing and Public Relations at the National Land Agency, Nicole Hayles, formally handed over the items on the Agency’s behalf, which were accepted by CEO of the Child Protection and Family Services Agency (CPFSA), Rosalee Gage-Grey. According to Ms. Hayles “this donation by the National Land Agency continues to solidify our efforts as exemplary corporate citizens, as the well-being of our children, who are the future men and women of our country, must be at the cornerstone of all we do. The Agency is pleased to be part of the scores of Jamaicans who have contributed to the needs of the children and administrators at the Walker’s Place of Safety, and we stand in solidarity with the Child Protection and Family Services Agency as they help to return normalcy to the lives of the children who experienced the traumatic and devastating episode on January 15, 2018.”

In her response, Mrs. Gage-Grey noted that “the CPFSA is very appreciative of the kind donation received from the National Land Agency, because like many others, they have come on board and provided much needed assistance to the affected children from the Walker’s Place of Safety.”

The items donated by NLA staff members were in response to the massive fire at the Walker’s Place of Safety located on Lyndhurst Crescent, Kingston 5 on January 15, 2018. The fire claimed the lives of two (2) children, destroyed the home, as well as displaced other children who have since been relocated to other facilities.

For general information about our services, please contact us at: